How far have televisions come to be what they are in today’s world. Back in the day when 720p was the bomb for video resolution. Now we are at 1080p being the norm, with some avid televisions watchers sporting 4k or even 8k resolutions. We are even starting to get these connections for people on phones or computer monitors! For those of you who are struggling to catch up to technological norms, the Reuseum has your back with televisions, monitors, and other video displays of unimaginable video quality. Check out the information below for more info on the super cool, incredibly awesome, monitors, televisions, and other display stuff we have at the store!

New Windows and a Door Too!?

The Reuseum is currently getting some windows and door replaced! Until they are finished, we won’t be able to have people in the store but we still will be accepting donations outside. Thank you to everyone who wants to both donate and stop by. They should be done today and we will inform everyone once […]

Flying through the air; its a bird, or is it a plane? No. It is Super Cool Mechanisms at the Reuseum! We are talking about giant three-phase transformers, massive thousand volt capacitors, or insane feats of technological innovation, from solar panels that capture the energy of the sun, to telescopes that allow sight into the […]

Do you need tripods for various situations? Are you, perhaps, addicted to the tripodal form? Is your mental fortitude so unstable that you are unable to function without a tripod near you? Luckily for you, the Reuseum has your back with a bunch of machinery using the tripodal design. Telescopes for tracking the stars, tripods […]

Television Central at the Reuseum!

For those of your who don’t know the Reuseum, we get all kinds of items from people who are either cutting back, upgrading to a newer system, or replacing their non-functioning stuff. Every now and again we get perfectly functional televisions because of any number of these reasons.  Below are just a few of the […]

What did the Motherboard say to the Daughterboard?

You are looking through your garage for the screwdriver you knew you had when you see it, behind the wall of “stuff” you thought you would use at a later date. Miscellaneous cables, old phones, retired computers, and the third coffee machine you bought that one year; all of it, is in your way. It’s […]

Capture a Moment with these Photographic Contraptions!

Different events happen every moment and with the holidays quickly on the way, you might need something that would keep those countless moments in hand. Cameras not only make for wonderful gifts, but allow you the ability to capture the events of your holiday season. Whether your shopping for collector of antique cameras or someone […]

Do you hear that noise? It’s the sound of a good deal at the Reuseum! 25% off of audio equipment at the store! Stop by the store to check out more of what we have.

The Reuseum has many DIY kits and projects that would be perfect for children and parents to enjoy making together! Whether one learns about the powers of electricity or about the nature of motion, you can expect to enjoy the process as you put the projects together. Check out some of the projects below!

Calling all scientists! Calling all scientists! Useful laboratory equipment for any scientists lair. Autoclaves, measuring scales, centrifuges, heat plates, and even a biological safety cabinet! Check out this Baker branded SG-400 Safety Cabinet! This Baker SterilGard II SG400 laminar flow hood is a class II, type A (when the unit is vented to the outside, […]

To Tablet or not to Tablet; That is the question?

Back to School Deals; Computers, Laptops, and More!

Are you going back to school this year from the comfort of your living room? Do you plan on attending classes without actually going to class? Or do you simply want to upgrade your old computer system? Expecting good, functioning computers at a low cost to be on the shelves at the Reuseum is like […]

The Power of Storage!

You are working hard making electronic projects, gizmos, and other doo-dads. It then dawns on you, “Not only do I need to protect my projects from the elements, but dogs as well!” Your outdoor lights need a controller that can identify when its night outside but keeping it exposed outside would cause a quick malfunction […]

Improve your life with these items!

Incredible. Your curious disposition allows you the incredible human reaction of stumbling along to this site and reading about what the Reuseum holds within its vault of treasure. Below are a few of the items that might improve you day in some sort way. The other scientists call you shaky-hands Fred, and your tired of […]

Stereo’s, Receivers, and Tuners; Oh My!

You’re in Idaho, sitting on your porch with your dog. You happen to be listening to the rock-and-rolls from your stereo when all of a sudden, a tornado appears. You head to the entrance of your basement, which for some reason is outside, but the tornado-force winds fell a tree which happened to land specifically […]

Technology from a Bygone Era

Aunt Linda needs a new VCR player to play the thousands of VHS tapes she has around the house. Legends speak of the players that played them, almost fit for museums now. One might have to scour the internet to uncover a player in working condition. But luckily for your aunt the Reuseum has her […]

Laptop Computers For Any Situation!

You end up searching the internet for the latest and greatest cat video out there! You sit down on your couch, wrap yourself up in a warm, fluffy blanket, and set your laptop on your lap to get yourself ready for the adorable cat that’s sweeping the nation. Halfway through the video your computer crashes […]

According to the governor of Idaho, the Reuseum is considered an essential business! For those of you who are still looking for devices that are required to work from home, such as computers, monitors, computer cables, etc., stopping by the store is the thing to do to get those kinds of items you need. Alternatively, […]

Cool Stuff At The Reuseum

Your driving down Chinden road, waiting in 5 o’clock traffic, when, out of the corner of your eye, you see it. The Reuseum, a shining beacon of hope in an otherwise boring parking lot experience. You end up making a decision, one that will change your afternoon forever. You are now in the Reuseum, perusing […]

Your watching television and all of a sudden the television explodes! A normal person might go to Best Buy in order to purchase a new television, others might hire someone to fix the one they own. However, your different. You look back into your memory at the times when you were learning about electronics and […]

Did you know we had Electronic Magazines and Books?

Are you a budding electronic enthusiast who just can’t stop learning the world of electronics? Have you finished scouring through the internet with a thirst for knowledge, only to be disappointed that there wasn’t enough information? Luckily for you, avid reader, the Reuseum has cool magazines and informative books all pertaining to electronics, physics, mathematics, […]

Computers Galore At The Reuseum!

Get suited up and ready to go for the start of the new decade! Update your old computers, get more monitors, improve your computer surround system, and stick with the same old windows operating system you have been using since windows 95. We have monitors at a dollar an inch, i5 computer towers below $100, […]

Do you listen to music? Do you get a cold sweats in the middle of the night thinking that your rocking stereo system might not be enough to wake up the nextdoor neighbors in the morning? Luckily for people like you, the Reuseum exists in order to provide you with improvements to your music lab. […]

Science and Electronics Kits at the Reuseum

After looking online at all of the cool kits and robotic projects, we decided to smash our brains together and make some of our own. Check out some of the kits we made down below! DIY Stir Plate Kit Magnet stirrers are often used in chemistry and biology. They are preferred over motorized stirrers because […]

After countless months of the website not working, the Reuseum has finally gotten the website to function! Through hours of blood, sweat, and tears we have managed to updated the website to support the new goals and plans of the Reuseum! Showcasing the store in all its glory, the homepage will function to introduce people […]

Check us out at our Location! 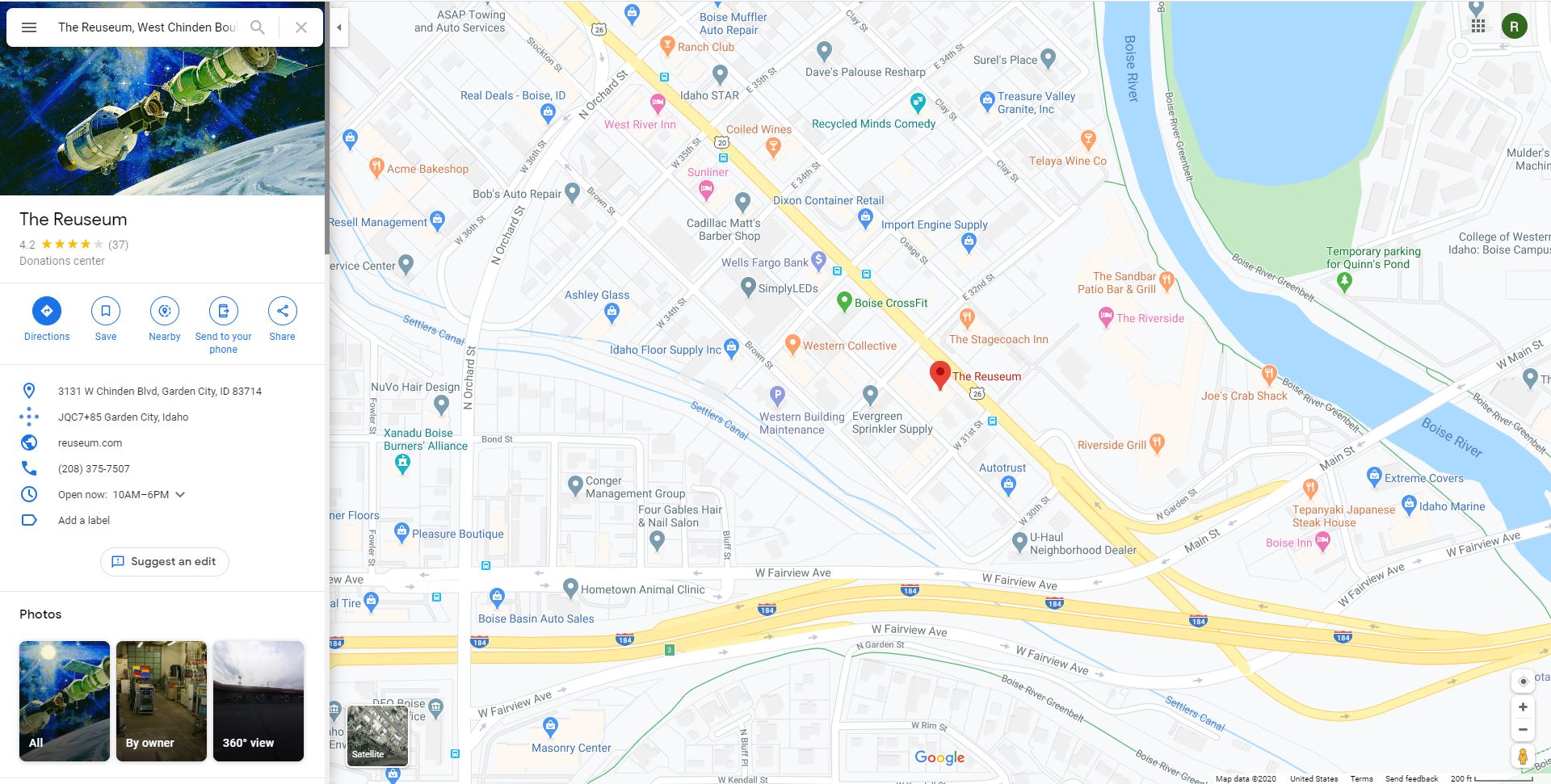